Speech by Sex Worker from Burma at AWID-Conference

at AWID forum
in Istanbul, 21 April 2012
Association for Womens Right's in Development www.forum.awid.org/forum12/ 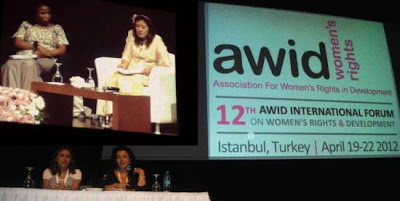 I am Kthi Win from Myanmar and I am a sex worker. I manage a national organisation for female, male & transgender sex workers in Burma & I am also the chairperson of the Asia Pacific Network of Sex Workers. Until now, organising anything in Myanmar has been very difficult. And people ask, “how did you set up a national programme for sex workers?” And my answer to them is “Our work is illegal. Every night we manage to earn money without getting arrested by the police. We used to work and organise together, so we use this knowledge in order to work out how we can set up the National Network without making the government angry”.

Like other workers, we gain more economic power by organising collectively and demanding our rights.

The key demand of the sex worker’s movement in Burma, in Asia and all around the world is simple. We demand that sex work is recognised as work.

But we have one OTHER key demand, specific to certain parts of the women’s movement.

We demand that we are not treated as victims. Sex work is work! Sex work by definition, is NOT trafficking. Treat us as workers and not as passive victims.

For me and for sex workers movement in Myanmar, the thing that changed us the most and inspired us was to meet other sex worker activists and to become part of the broader sex workers rights movement through APNSW.

We organised for members of APNSW to come to do a workshop in Myanmar and we met other sex worker activists and learned about how they organised and how they can do things for themselves.

Until then we thought that we would be led by and learn from non sex worker experts in other NGOs. But what we learned and what made the change was that we realised, that instead of having to do what other people told us, we could do it ourselves and become more powerful by being part of a regional and global movement for sex workers rights.

Many people always assume that sex workers have less power than our customers. They assume that because customers are men they have all the power. But who pays whom?

Who makes the money?

It is sex workers who make money. And by understanding men and what it is they want from us, we usually end up walking away from them with more money than they agreed to give us at the beginning.

Also people do not realise that many customers become our good friends and they keep supporting us.

We have learned to work out what it is that the donors want from us, or what it is the national government or district officials expect from us.

We then frame what we need in ways that will help them to do what it is that they need to do.

SO in building our movement we build the confidence of sex workers to use the skills they have already learned.

We get a lot of quiet support from most of the women’s movement.

They say that women like me are all victims.

They tell you that there is some pimp or madam who has told me what to say.

They tell you that some man who works for an “international sex trafficking and pornography syndicate” will beat me or violently rape me if I do not do what I am told.

So, let’s talk about attacks and violence against sex workers.

And when I say attacks on sex workers, I don’t just mean verbal attacks or debate within a movement.

I mean real violence on a daily basis against women like me.

Do you know that sex workers do not live in fear of violent clients?

(Note: I'd add "not only". Maybe "rescuing" by police is such a big problem in Myanmar that violence from clients gets in the background, but it's still a real, problem, especially in countries where sex workers can't trust the police. Violence by clients may be exaggerated in public debates in the sense that it is presented as a normal occurence, but this does not mean it doesn't exist)

We live in daily fear of being “rescued”.

The violence happens when feminist rescue organisations work with the police who break into our work places and beat us, rape us and kidnap our children in order to save us.

As a movement, feminism is meant to believe in agency. Even oppressed women in sex work can make choices. But we cannot chose not to be saved when a policeman or police women has a gun pointed at our head.

What we need is for the mainstream women’s movement to not just silently support our struggle but to speak up and speak out against the extremists who have turned the important movement against real trafficking into a violent war against sex workers.

I ask that you all to stand with sex workers.

We ask you to TALK with sex workers.

Nothing about us without us.

It’s time for the silent majority of feminists to stand with us and say: